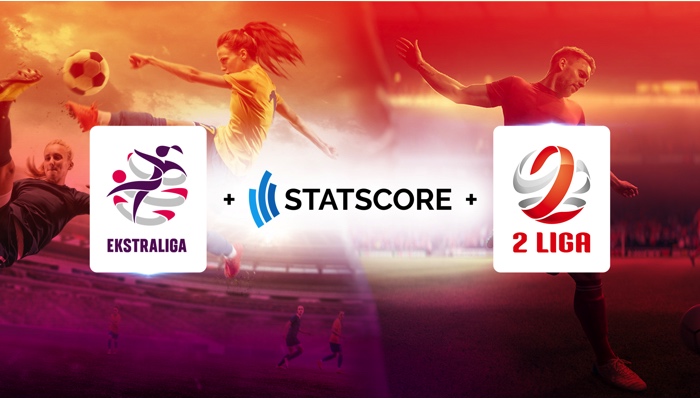 Starting from the spring portion of the current season through the end of the 2022/23 campaign, STATSCORE will be providing official sports data and statistics for the Polish Women’s Ekstraliga and Men’s 2. Liga.

“We warmly welcome the Women’s Ekstraliga and the 2. Liga of football among STATSCORE’s partners! It’s thanks to you that we’re able to build the biggest sports data center in the world. As a company that strategically supports Polish sports, we’re happy to be able to support the development and promotion of two more leagues operating in our country. Fans of 2. Liga and Ekstraliga will surely appreciate the advanced statistics and exceptional live coverage of the games of their favorite teams.”

“We know how important the analysis and statistics are nowadays, and how well they attract the attention of football fans. We can say that they have become a crucial, or even indispensable, feature of this sport. We are also happy to keep improving the quality of the league by establishing such a collaboration”

STATSCORE’s advanced solutions for sports data collection and processing will allow the leagues to gain access to all the statistics in a compact way through dedicated League and TeamCenters.

“The cooperation of STATSCORE and the Polish Football Association is a good example of reaching our goals in relation to sports organizations. We are glad that new competition organizers recognize the vast and unique opportunities of development that our company offers to sports tournaments as their Official Data Provider”

The agreement between STATSCORE and the Women’s Ekstraliga and Men’s 2. Liga will allow the Polish Football Association (PZPN) to present these competitions in better and more effective ways.

Telewizja Polska SA remains the official broadcaster of both leagues.

STATSCORE’s is a Polish company whose mission is to build the Biggest Sports Data Center in the world. The company provides highest-quality sports data and statistics in the form of widgets, minisites, and feeds. STATSCORE supports sports fans and organisations, media outlets, and bookmakers, by offering reliable live data, in-depth statistics, and attractive visualisations. STATSCORE’s products are used by leading businesses around the world, including media organisations, such as Le Figaro and Onet, and bookmakers, such as Ladbrokes and Eurobet. The company is also the official data provider for sports leagues, such as PGNiG Superliga and Futsal Ekstraklasa. In 2018, STATSCORE was recognised as one of the 50 fastest-growing technology companies in Central Europe (Technology Fast 50 CE).

ABOUT THE POLISH FOOTBALL ASSOCIATION

The Polish Football Association (Polski Związek Piłki Nożnej) is the governing body of football in Poland. It organizes numerous Polish football leagues (including Fortuna 1. Liga, 2 Liga, Women’s Ekstraliga), as well as the Polish Cup tournament. It also manages the Polish national football team. The association is based in Warsaw.